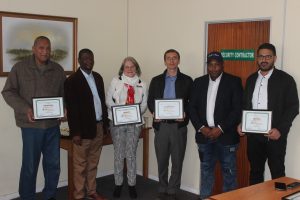 The Green Initiative was formed by SM Mart Waste Management which was founded by Siyanda Dinginto with a purpose of creating jobs and minimizing waste going to the landfill and they are affiliated to Wasteplan and the Epping City Improvement District. They also run recycling programmes with schools in the township.

SM Mart’s plan is to collect recyclable materials from companies in Epping which are managed by the CID.

At no cost to the companies, the materials are then transported to Wasteplan facilities which are also based in Epping.

Recyclables are collected on a weekly/monthly basis depending on the amount, collections are outsourced to smaller business, thereby generating job creation and giving back.

The Epping CID is working with different organisations and charities around Epping namely the Langa Baptist Church, Church of Nazarene in Bonteheuwel, who both run soup kitchens as well as handing out food parcels and the Cart Horse Protection Association in Epping.

SM Mart together with the ECID, have managed to get companies to participate in the initiative namely Green Cross, Medi Post Pharmacy Illumina Lighting and Prima Toy just to name a few.

A portion of the monies generated goes to the ECID who in turn support those organisations named above.

SM Mart then award the companies with a Green Certificate which is recognised by Wasteplan and the City of Cape Town.