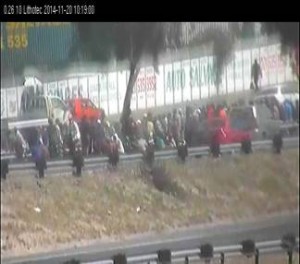 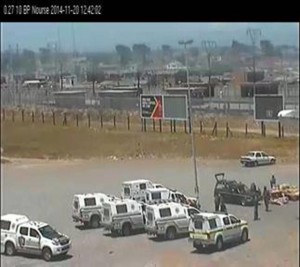 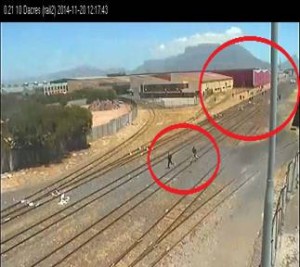 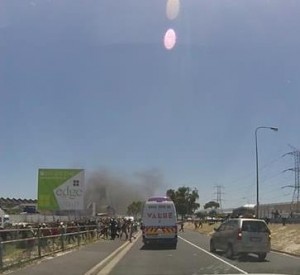 The Servest protest, related to the landscaping division, has been on-going since the 10th November 2014. The strikers were continuously moving between Bonteheuwel Station, Servest Landscaping (Gunners Circle) and Goodwood Station. Besides the general toi-toi and vuvuzela’s blowing, it has been a relatively quiet. On Monday the 17th November, the group of protesters picked up the pace and the ECID and various Law Enforcement agencies received complaints of vehicles being stoned on Gunners Circle, Vanguard Drive and at the intersection of Vanguard Drive and Viking Way. The week continued with complaints being received daily regarding the stoning of vehicles and one suspected hi-jacking. It was later learnt that the hi-jacking was a false complaint. At 05h32 on Thursday the 20th November, Mr Ord of the Epping CID received a call from the ECID tactical response vehicle informing Mr Ord that the strikers were preparing to burn tyres at the entrance to Servest. Mr. Ord informed the Tactical Response vehicle to intervene and remove as many of the tyres as possible. At the time of the intervention, the ECID Security did encounter some resistance from one of the protesters who was apprehended and handed over to the Pinelands SAPS. At the same time, Mr Ord informed the shift senior Mr. Boois to request the presence of SAPS’ Public Order Policing, as there is a possibility that the protest action might reach boiling point. Between 06h00 and 11h00, the situation, as predicted, had reached boiling point and Pinelands SAPS were called to assist. At the arrival of SAPS, the crowd was already in motion and proceeded to burn tyres completely obstructing the entrance to the property and break down the pre-cast wall to gain access to the premises. The Pinelands SAPS three man crew was unable to perform any crowd control measures. At approximately 12h05 SAPS Public Order Policing had arrived on the scene and commenced to disperse the crowd. Mr Ord and Mr Bartram were, at the time, driving along Gunners Circle coming over the bridge towards the protest. Coming over the bridge it was noted that the crowd was dispersing in all directions, where Mr Ord had stopped and made an immediate move to apprehend some of the protesters. At this time, one female was apprehended. Mr Ord proceeded further down the road to hand over the suspect to Pinelands SAPS where the officer refused to take custody of the protester. Capt. Van Den Berg intervened and placed the protester in the SAPS vehicle. It was at this time that the ECID Security and Law Enforcement fully mobilized and proceeded to apprehend more of the protesters. Some of the protesters also proceeded to run along the central railway line, where they were apprehended by the ECID Security, During the process of apprehending the protesters, the combined ECID Security force including the ECID Law Enforcement and with the assistance of two additional units from Law Enforcement Bellville, successfully apprehended and safely handed over twenty seven protesters to SAPS. All of the persons apprehended were positively identified by the management and staff of Servest as been employees of Servest and were arrested.