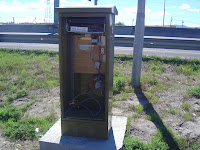 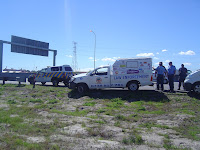 The ECID Law Enforcement received a report from their control that 2 people were tampering with the camera control box on the side of the N2 near the Bunga Avenue off ramp.They responded and found the 2 male suspects along side the N2 in possesion of components from the control box to the value of R 45 000.00. The total damage to the control box was R 110 000.00. Both suspects were arrested.